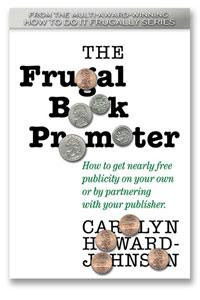 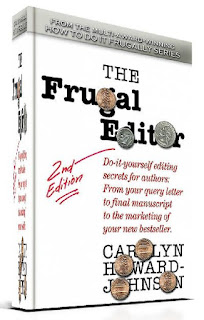 Product Placement and Why It May Be Right For Your Book
By Carolyn Howard-Johnson, author of the multi award-winning books The Frugal Book Promoter and The Frugal Editor, both in their second editions
About a year ago I was answering questions for an online interview to promote the Southern Utah Book Expo I would soon be presenting at. Because I am from Utah, my high school newspaper and yearbook became a topic of discussion and mentioned that getting sponsorship ads for those things was as vital to their being as the photos, writing, and layout of those parts of high school life we all value.
Authors do the same kind thing with their Web sites. Carefully vetted ads can add value to their contents. I am a sometime actor and occasionally I notice how carefully a director places a picture on a wall or a can of Coke on the table in the shot he's taking. That's placement advertising and we—as consumers of both the Coke and the ad itself—hardly notice. It's subliminal. It's natural to see them there. And besides, the US lauds capitalism and monetary independence. In fact, many metaphorically wave the flags of commerce in our politics (though some suddenly become shy about doing so for their own books! But more on that later!)
Just as I'm thinking about that, I ran across a related article in the business section of the LA Times. Of course! It's about product placement in videos and how it's growing. And how it's making some smart video companies and producers some really big dollars. Why am I not surprised? Here's why. The Love Boat, the TV series from several decades ago, was one giant product placement sitcom! This kind of marketing is not new—nor is it unacceptable. And I'm used to sponsorships (a soft word for advertisements) appearing in the front- and backmatter of fine literary journals.
Now, back to the idea of authors using the same techniques for upping the value of their content and for fattening their pocketbooks. I hope I've convinced you that if it's OK for everyone else, it's OK for those who write books.
For any author to sell product placement or advertising and make large quantities of money requires an audience (we authors call it a platform). But it can be done on a small scale—perhaps out of the goodness of your heart or perhaps in trade with other authors who are out there making videos and otherwise promoting and building their platforms like crazy.
The video entrepreneurs in that article remind others that audience is "more important than any brand deal." They say that if they love a product, it feels good to do something with it commercially. But it's even more than "love." The bigger question is, "Does this product benefit (elucidate) the work itself?" Another is, "Is the product something that might benefit the author's intended audience?"
If you've decided something like this is worth exploring, here are a few guidelines for you to consider:
So what are the guidelines for success—whether it is a paid-for project, a bartered one, or the goodness of your heart?
On that latter point, one of my subscribers, Reno Lovison, once made a slide-show video for me without even asking. He sent it to me as a gift with suggestions of how I might promote it. It was an interesting turn around because his own promotional materials and video business were the product placements within the ad he made for me. Talk about partnerships! His Web site is http://authorsbroadcast.com/ and if you look at the books on his Web site, you'll also see the cover of one of my retail books for which he made a more traditional sales video several years ago (and which I still use in multiple spots on my Web site).
-----
Carolyn Howard-Johnson brings her experience as a publicist, journalist, marketer, and retailer to the advice she gives in her HowToDoItFrugally series of books for writers and the many classes she taught for nearly a decade as instructor for UCLA Extension's world-renown Writers' Program. All her books for writers are multi award winners including the first edition of The Frugal Book Promoter published in 2003. Her The Frugal Editor, now in its second edition, won awards from USA Book News, Readers' Views Literary Award, the marketing award from Next Generation Indie Books and others including the coveted Irwin award.
Howard-Johnson is the recipient of the California Legislature's Woman of the Year in Arts and Entertainment Award, and her community's Character and Ethics award for her work promoting tolerance with her writing. She was also named to Pasadena Weekly's list of "Fourteen San Gabriel Valley women who make life happen" and was given her community's Diamond Award for Achievement in the Arts.

Carolyn Howard-JohnsonInstructor for nearly a decade at the renowned UCLA Extension Writers' Program Author of the multi award-winning series of HowToDoItFrugally Series of books for writers Amazon Profile: http://bit.ly/CarolynsAmznProfile The Frugal Book Promoter: http://bit.ly/FrugalBookPromoWeb site: http://www.HowToDoItFrugally.com E-mail: CarolynHowardJ@AOL.comFacebook: http://Facebook.com/carolynhowardjohnsonTwitter: http://Twitter.com/FrugalBookPromoPinterest: http://Pinterest.com/chowardjohnsonYou pin one of my book covers, and I'll pin one of yours! Let's Network Today!


Posted by Linda Barnett-Johnson at 1:08 PM